From BTAWiki
Jump to navigation Jump to search

Transferring Inventory Data To A New Save

This may be useful to you if you want to move your inventory (stored mechs, mechparts, weapons, equipment) from an old save to a new one because you started a new career (due to a save breaking update or otherwise). This will not copy Mechs in the Mech Bay (not directly, anyway, this is addressed later in the instructions), Pilots, Flashpoint/Campaign progress/completion, MRB or Faction reputation, Argo upgrades, map exploration, or anything else besides your inventory.

If you want to copy other things you can attempt to recreate them using the Save Editor's other features but that is beyond the scope of these instructions.

Step 1: Make a new career save

Step 3: Make a backup of your saves, just in case

Step 4: Export your inventory into a CSV from your old save 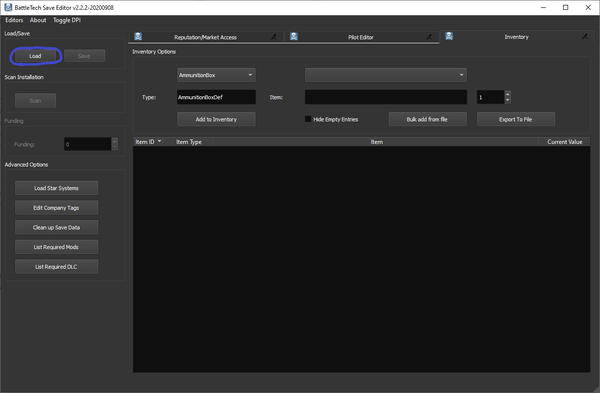 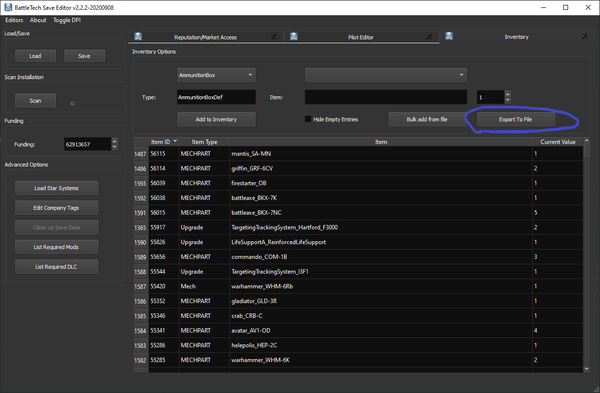 Step 5: Import your inventory CSV into your new save 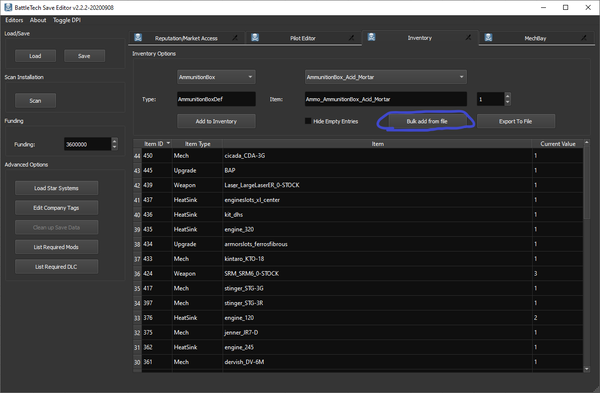 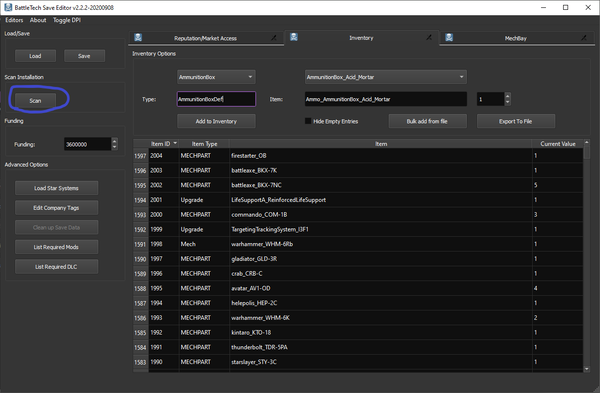 Edit the Funding section on the left to be the amount of cBills you had on your old save. Or more. Or less. Or whatever you want. (Note: Extremely large amounts of cBills in the billions can cause the amount to go negative in game due to it being stored in 32 bits, please keep the amount somewhat reasonable!)

This is to check your inventory and make sure everything imported okay. If it did, great! If it didn't you may have to try these steps again. This is not guaranteed to work, unfortunately. You will have to search your storage and find the mechs you want to pull out to replicate your Mech Bay. You will also have to do Argo upgrades so that you can have the same number of mechs at the ready. But at least you have your stuff!

Hides the UI. Requires the camera to be unhooked first!

Takes a high resolution (4k) screenshot without the UI showing. They are stored inside your user profile at C:\Users\UserName\AppData\LocalLow\Harebrained Schemes (replace Username with your actual computer username).

Brings up the console commands, assuming you have the console enabled. You can enable it by modifying the file here: BattleTechInstallFolder\BattleTech_Data\StreamingAssets\data\debug\Settings.json. Add an entry for "testToolsEnabled": true, (both the double quotes and the coma must be there!)

Normally the mechs that get stuck on terrain from randomized drops are in lance 2.

They do not ignore *all* evasion but 3 pips by default. Some support weapons also have more evasion ignorance on their stats that would stack.

They do not ignore *all* evasion but do ignore 4 pips.

C3 Bonuses Do Not Stack

Multiple C3 Slaves or Masters on your team do not stack. A single of each should, however. Although it's possible only the higher of the two has an effect.

They can however traverse burning or burned forest.

Acid mortars/SRMs and dissolving pulse lasers do not stack

They used to in the past but were changed sometime in 2020.

If for whatever reason the armor or structure value ends in a decimal point, it will round to the nearest except in cases where it's X.5. In that case it uses a "Round To Even" system where it will round up OR down to the nearest even number. This provides "more equal" rounding than always rounding X.5 up like is traditional.

Headcapping - Lots Of Small Guns Or A Few Big Guns For Better Odds?

To (hopefully finally) settle the debate about "stacking lots of weapons for headshots" or "use big hit weapons", use a binomial calculator. It's the perfect solution for these kinds of problems. Here's a good one: https://stattrek.com/online-calculator/binomial.aspx

TL;DR version: If you can't bring at least 5x as many weapons (or at least 5x as many shots), big guns that can one shot cockpits is always the more statistically advantageous way to headcap. And if your shots take more than 2 hits to kill the cockpit, you need to bring many many more to equal the odds of a one hit kill taking out the cockpit.

These builds were created from the standpoint of primarily using lots of clan weaponry and FCS ADV TCs. While generally lighter/smaller than their Inner Sphere counterparts, they also typically have shorter range. The Tactics tree helps make up for that shortcoming, which is one reason why I think it's so good. If all of your LRM boats run IS LRMs you might like to spec them Gunnery, for example, if the range increase is negligible to you. For cLRMs though the range increase is huge. Being able to make called shots is extremely important, strongly consider the Precision Master Gunnery build if you do not have access to FCS ADV TCs.

There are many viable pilot skill builds to use but I find that these are the ones that serve me the best.

Breakdown and details of all of the pilot skills can be found on the dedicated Skills And Abilities page.

The "I like initiative and/or want my weapons to shoot further build". My go to for anything that's not extreme range and wants to put out damage. LRM boats, ATM boats, anything that isn't insane range (like artillery or Arrow IV, they have enough range so don't need the benefits from tactics, spec those into gunnery for more damage). This build lets ATM boats shoot HE and STD ammo out so far you basically never need to bring ER ammo, which means bigger damage a lot of the time than on a Gunnery build because you can use much harder hitting ammo. More turns spent shooting is more damage done for other weapons as well. Personally, I'm convinced the Tactics tree is the best tree in the game for damage dealers that aren't boating artillery.

Support weapon boats can take Knife Fighter over Master Tactician for some extra punch and extra accuracy in close and medium range bands.

Closer range builds can consider swapping out Battlelord to either Sure Footing (Piloting Tree) or Bulwark (Guts Tree) depending on the speed/evasiveness of their mech. Can also swap Target Prediction to Sensor Lock if your pilot often finds themselves unable to fire due to being out of range or line of sight. It at least gives you a useful ability you can use to help your other mechs put out some damage.

My standard Scouting/Fast Interceptor build focused on staying alive and going fast. Sensor Lock as support for your heavy hitters (reveal out-of-line-of-sight targets, reduce evasion, etc.), this build is not designed to be used by primary damage dealers so you care less about their damage in general. Sure Footing over Phantom because I want the boost every turn and I run enough evasion boosters to get very high evasion regardless.

Replace Sensor Lock with Target Prediction if you already have a bunch of sensor lockers, generally I don't run more than 2 sensor lockers but YMMV.

Use this variation if you do not yet have access to FCS ADV TC sensor equipment that allows you to target specific enemy locations with the precise shot ability. This is extremely important for quickly taking out/disabling enemies or to have a better chance at getting ideal salvage. Either run FCS ADV TC or get this!

Replace Bulwark with Sure Footing if you are running a faster mech and/or like to focus on evasion over damage reduction.

If you're fairly certain the pilot will almost never be shot at you can instead opt for some team accuracy boosting utility from Target Prediction and forego the defensive bonuses. This is a good option for Artillery mechs that can fire indirectly from far away.

Guts Primary builds are basically for melee focused mechwarriors. Pick Juggernaut for a 2nd melee weapon (hatchet/mace/lance/sword) attack or pick Brawler to get a 2nd kick depending on what you intend to do. I took sensor lock as the secondary tree skill because it's useful if you're stuck out of range you can still contribute every turn as you should be in sensor range.

Switch out Sensor Lock and take Sure Footing if you would rather be extra defense focused. The extra evasion and lowered stability damage taken can be helpful to give you a boost in survivability although it does leave you often with nothing to do on a turn besides move if you don't also have a number of ranged weapons. This is why typically I prefer Sensor Lock.